What can leading a workcamp give you?

This year our ESC volunteer from Germany, Jule, was leading three workcamps in the Czech Republic. What awaited her, what challenges she faced and what did she learn?
26. 11. 2021|Jule Kurka 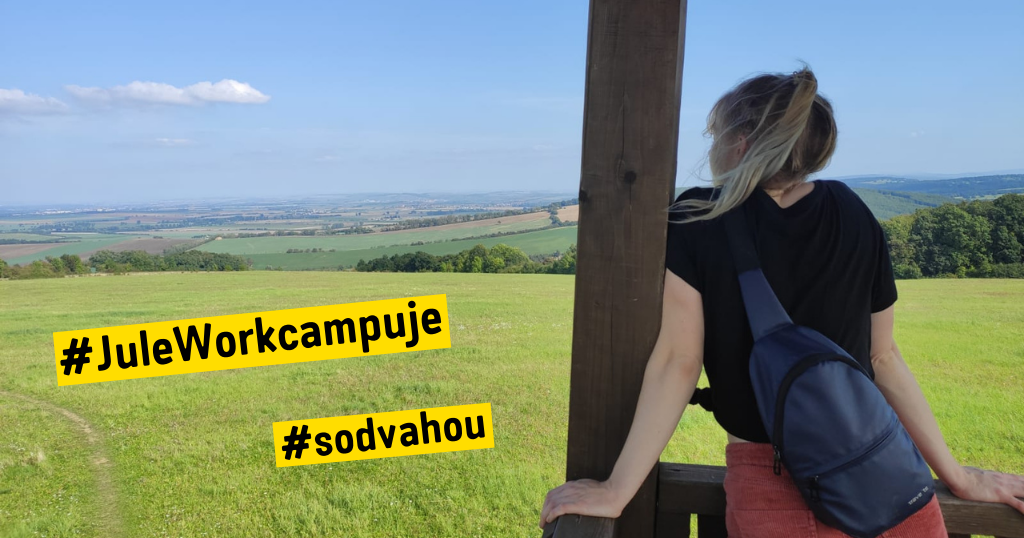 „I am so done. Done, but happy“, said Erwin, carrying not only his own backpack, but 7,5 additional liters of apple juice. We were on the way to our platform at Tišnov train station. As for the last two weeks, we could watch the sun shining from a light blue sky on golden leaves of all trees around us. We were quite lucky to experience the perfect autumn weather. During our work outside the last days and also when saying goodbye now. Tomáš, the local partner of  our workcamp in Předklášteří, has rewarded each volunteer with a large amount of apple juice we produced ourselves just a few days ago. Quite amazing being able to carry the fruits of our workcamp – but yeah, we also had to carry it.

„Done, but happy, that sums it up quite perfectly“, I said to Erwin, having in mind also the other two workcamps I was able to lead since the end of August. Standing there at the train station, packed with bags, sleeping mat and apple juice, it seemed to be a perfect closure of my campleading experiences in Czechia.

Every workcamp taught me something new, brought its own challenges, new valuable contacts and friendships. Having led two other workcamps and campleaders` trainings in Germany via my sending organization IBG e.V. before, I was kind of aware what kind of effort would await me, on what I wanted to work and focus on specifically as a campleader. In the end, I always faced unexpected, at first sight overwhelming situations, that I could handle a little better and with more confidence than before.

That counts for my first workcamp in Česká Kamenice close to Děčín and the German border, where my co-campleader and our eight volunteers were working at the monument side for victims of WWII and for those Sudeten Germans, who have been tortured there (you can read more about it here).

It counts for my second workcamp in Tvarožná Lhota near Bilé Karpaty and the Slovakian border, where we two campleaders and our six volunteers helped setting up and running a festival for a weekend to celebrate a local fruit.

And it counts for my third workcamp in Předklášteří close to Brno, where me and three volunteers were discovering common Czech-German roots in history and language while also helping with work in and around a monastery, like gardening or producing apple juice.

The group sets the tone

For the first workcamp, I definitely felt the most prepared. The other campleader and I had a great visit, we were in touch with the local partner, the mayor of Česká Kamenice, quite often and we had prepared a program with many educational and free time activities.
I can also say that this workcamp might have been the most touching experience for me personally as well as for some of our volunteers. Hearing from witnesses about their deportation processes from the former Czechoslovakia first hand was incredibly eye-opening and insightful for us and meaningful for our work. Besides learning about Czech-German historical and political relations, our strong group connection is what I also take the most from this workcamp.
Although it would not stop raining almost until the end of the project and we were sleeping all the time in tents, we found many ways to cope with the weather, we enjoyed many games, one volunteer played some of her instruments, we were listening to our common music playlist and interesting stories – everyone became active and creative to make the best of our situation. I am proud that I could initiate and give impulses for those ideas and a comfortable atmosphere in the beginning.
Further, I was glad I was able to handle and soothe some conflicts and misunderstandings within the group. There was also a problem with a member of the local community, who had quite a temper, which I was happy I could face with tranquility and in the end, our volunteers could even make fun of some intense situations. It was very important for me to realise once more that people have different needs that are best to be addressed according to their diverse personalities.

Learning a language is one thing, depending on a not fully developed language skill a whole other. Before my first workcamp I was happy to understand most of the cashiers, some small talk at the INEX office and some Czech e-mails.
When the other campleader got sick and had to go home in the middle of the project, I realised that now these skills were quite important not only for me, but for the whole group, since I suddenly was the only person who could speak Czech (as much as I could at least). However, I was confident that I would be able to communicate the most important matters.
In the end, I for example managed to explain to strangers who were passing by our camp what we were doing (well, in a funny way, but still!), tell the volunteers how to get a bus ticket and attract visitors of the local festival to participate in our language games at our workcamp stand. And, most of all, I became way more confident about making many mistakes and asking questions while speaking and trying to understand Czech.
This self confidence still helps me to be more patient and satisfied with my learning process, but also to be more understanding with others who are learning English or German. So here a small shout out to all the language learners: we can do it!!! 😀

Never having participated at a weekend workcamp before, I was wondering how this experience would be. Would there be this special family like group feeling I have normally experienced at a workcamp? Would we be able to work efficiently enough and still find enough time to explore the area a little bit?

Now I can definitely answer these questions with a clear yes, even if in a different way of course. Especially during shorter projects, creating space for volunteers to communicate their wishes, feelings and needs is important and becomes also more of a challenge, but the other campleader and me managed to make time for them and group meetings even though we started working, harvest some fruits and putting up festival stands immediately after most of the volunteers arrived at the campsite. I learned to trust more in each volunteers’ abilities and how to encourage and motivate them for our work or give more confidence if they need it. Moreover, during this weekend we had the most diverse group regarding the age. It did not matter if 19 or 70 – we could work together, laugh about the same jokes and learn from each other. It was inspiring not only being able to trust more in this dynamic group process, but also to watch us growing together. A short, but not less valuable and intense experience as a campleader.

Although I felt prepared to lead a third workcamp after having learned so much from the other two, I could also felt lots of exhaustion. This was the project I had an eye on leading since I started at INEX in February. I was really looking forward not only to leading a group of volunteers, but also to learn more about Czech-German history and exploring southern Moravia. I did not want to feel exhausted and nervous, but yet I did, so I needed to somehow cope with it, liking it or not. And even though I was more tired and exhausted faster than during the other workcamps, in the end it was one of the most enjoyable and studious experiences. During no other workcamp me and the three volunteers have done so many different tasks. We did everything from harvesting apples, making apple juice, gardening, working with stone, trips to Brno and surroundings, learning about Czech-German history and language, exchanging with the local community there and discovering the story of a Sudeten German through her documents she passed to the municipality.

I especially learned to work and be more structured during these diverse jobs, for the sake of the volunteers and for my own. I learned to appreciate that I could take much more time for each of the volunteers, have deeper conversations with them and could support them to express themselves and their needs, because there were only three of them. And I also learned how to take care of myself better and ask for privacy if I needed it in the workcamp situation. for me one of the most precious learnings at this time.

All of this was running through my head while waiting there with Erwin and our apple juice for our train to Prague. To go home and to be able to rest – and to gather forces for the next workcamp season. Because even though workcamps can definitely be exhausting and intense, for me they offer the most valuable and incomparable learnings and experiences. They help me to jump over my own shadows always a little further. And I am sure they can be a great experience for many others as well.

If you would like to have a closer look at what I and other campleaders experienced this workcamp season, have a look at our Instagram stories or follow #JuleWorkcampuje and #sodvahou.

Do you need a reminder how it all started? Read Jules’ first article. 🙂 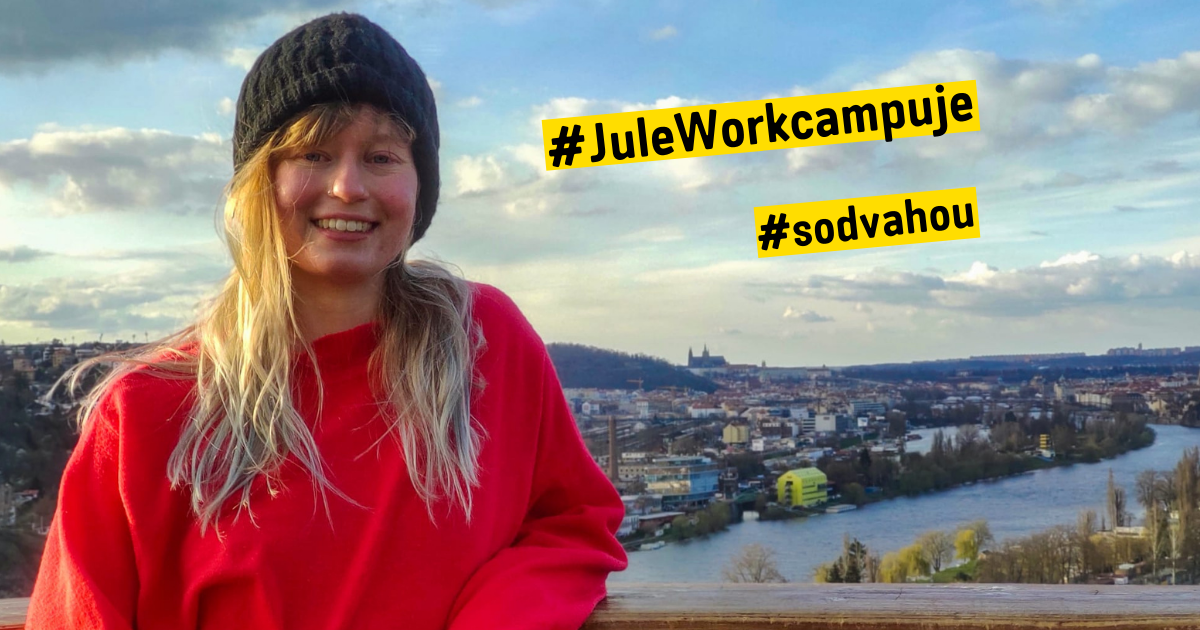 The idea of workcamps has been accompanying me now for about three years. Since my childhood I was eager to go abroad, discover new places, learn about other people and alternative ways of living. 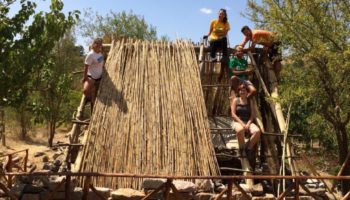 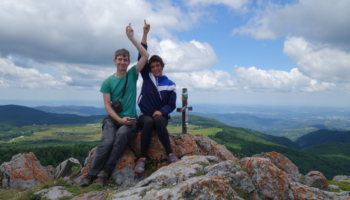 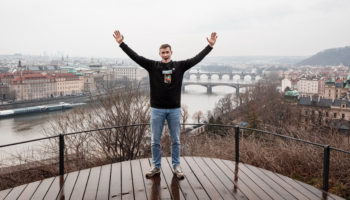